Handbags and Ochre and Hearts, Oh My!: A Survey of Canadian Trademark Applications for Textures, Holograms, Motions and Colours

What do the texture of a CHANEL handbag, INTERAC’s use of the colour ochre, and a TWITTER animation of hearts have in common? They are all subject to applications for non-traditional trademark registrations in Canada.

In June 2019, the Canadian Intellectual Property Office (“CIPO”) began accepting applications for certain new types of non-traditional marks. As discussed in our previous articles on scent marks and taste marks, there are unique challenges and obstacles associated with applications for non-traditional marks in Canada. We surveyed the applications filed to date for marks indexed as textures, holograms, motions, or colours per se. Our research revealed that the majority of such applications have been improperly (perhaps inadvertently) filed in these categories and/or failed to include the information and details required by CIPO. This underscores the importance of retaining a qualified trademark agent or lawyer to assist with such filings. In this article, we will focus on the subset of applications in these non-traditional categories, which do not suffer from these apparent errors. Our research shows that businesses across a range of industries are seeking to take advantage of these new protections for their brands.

CIPO has provided the following examples of acceptable descriptions of a texture trademark:

The trademark consists of the texture of 100 grit sand paper on the surface of the associated goods.

The trademark consists of the texture of fine leather on the surface of the bottle as depicted in the visual representation.

The trademark consists of the waffle type texture as applied to the surface of toilet paper as depicted in the visual representation.

While most of the applications indexed as texture marks to date appear to have been improperly filed, there are a few which clearly intended to claim a monopoly over a texture. One example is application number 1857141 filed by Pyrrha Design Inc. for a trademark described and depicted as follows:

The mark consists of a frayed texture applied to the edges of a card. The stippled line in the drawing is not a feature of the mark but is a representation of how one type of the frayed texture may appear in visual form on a card. The mark is a sensory, touch mark. 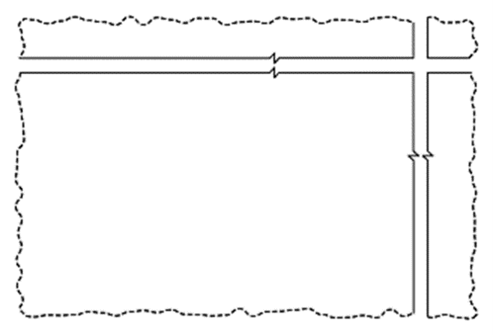 Interestingly, this application was filed in September 2017, well before the amendments to the Act which introduced texture marks came into force. This suggests that the trademark type was amended during examination once the June 2019 amendments came into force. The goods and services covered by the application are “jewellery; necklaces; pendants; jewellery rings; earrings; cufflinks; bracelets; charms for jewellery”.

The trademark consists of a three-dimensional shape and texture of a handbag. Three visual representations (three views of the same trademark) of said shape, appearance and texture, including the matelassé type and lined texture, of the handbag consisting of the trademark are provided.

The trademark consists of a three-dimensional shape and texture of a handbag. Three visual representations (three views of the same trademark) of said shape, appearance including the matelassé type texture, of the handbag consisting of the trademark are provided.

These early applications provide some indication of the sectors which could capitalize on texture mark registrations. However, there are opportunities in a wide array of sectors and applications, including textiles and fashion, packaging of consumer products and cannabis, to name a few.

Registrations for hologram marks may prove to be less common than the other categories of non-traditional marks. A hologram is defined as a three-dimensional picture made by laser light reflected onto a photographic substance without the use of a camera. Although holograms can be a singular image, they can also show different images when viewed from different angles.

In order to comply with paragraph 30(2)(c) of the Act, an application for a trademark containing or consisting of a hologram must include a visual representation in the form of one or more still images, sufficient in number and clarity, to demonstrate the holographic effect in its entirety.  The application must also include a clear and concise description of the visual effect when the hologram is viewed from different angles. The application may also include a digital representation of the trademark, in the form of a moving image (animation) clip, that demonstrates the holographic effect in its entirety.

CIPO has provided the following examples of acceptable descriptions of hologram trademarks (the second of which includes a colour claim):

The trademark consists of a hologram of a dove in flight.  The visual representation included in the application depicts the full range of the holographic effect.

The trademark consists of a hologram of a map of the world as depicted in the visual representation.  The trademark has a holographic rainbow colour effect and the applicant claims the colours red, orange, yellow, green, blue, indigo, violet as a feature of the trademark.

To date, only 9 Canadian applications have been indexed as hologram trademarks, the majority of which have been improperly filed. The sole application which includes a series of still images together with a description of such images is application number 2048361 filed by AAMIR BAJWA GROUP Corp. The application includes the following images and description:

A Falcon facing right inside a shield logo and word 'BAAZ' in font 'Che Lives' and the word 'by Aamir Bajwa' in font 'Dancing Script'. BAAZ means Falcon in many South Asian languages and Aamir Bajwa is the name of the mentor.

This application covers various clothing and computer-related goods. As it has not yet been examined, it remains to be seen whether CIPO will require further specificity in the description of the proposed hologram.

It is possible that some of the remaining applications were intended to cover hologram marks but that revisions to the descriptions will be necessary to comply with the requirements of paragraph 30(2)(c) of the Act.

CIPO has provided the following example of an acceptable description of a moving image trademark:

The trademark consists of a moving image of a book being opened and a page turned, as shown in the visual representation included in the application.

That being said, the following applications are among those that include descriptions and animations of the respective motions. As you will see, there is variation in the amount of detail provided in the descriptions.

The foregoing applications cover goods and services ranging from voice controlled personal assistant devices and speakers, to software for use in accessing customized airfare and flight information, to mobile applications for social networking ,to advertising and marketing services, to smart cameras and consultancy services (among many others).

It has long been the case that colour could be claimed as part of a design mark. Prior to the recent amendments it was also possible to secure registration for a colour as applied to the visible surface of a specified shape/object. However, the 2019 amendments introduced marks consisting of “colour per se” meaning a single colour or combination of colours without delineated contours.

In order to comply with paragraph 30(2)(c) of the Act, an application for colour per se must include: (i) a description that provides the common name of the colour(s); and (ii) a visual representation consisting of a square swatch in each colour.

Applications to date for marks consisting of colour per se include the following:

The foregoing applications cover goods and services ranging from computer hardware and software, to cannabis products, to financial services and roofing tools.

To date, the overall number of applications filed in these new categories of non-traditional marks remains low. However, brand owners across a range of industries including social medial and software, fashion, cannabis, and financial services are using and seeking to protect non-traditional marks. Overall, this represents an enormous opportunity for companies to protect and monopolize distinctive attributes of their products and branding.

CPST Intellectual Property is available to assist with your non-traditional trademarks. Please contact any of our trademark professionals to inquire as to our services.

Choose Your Own Source: Adding A Trademark to Someone Else’s Goods

In a recent decision arising from an appeal of a decision of the Trademarks Opposition Board, the Federal Court commented on when a retailer can establish use of a trademark on goods when the retailer is not the “source” of the goods. Specifically, if a retailer simply affixes its own trademark to goods manufactured by a third party, does that constitute use of the retailer’s trademark in association with those goods.

Interlocutory injunctions in Canadian trademark cases are rare. The decision at first instance to grant a motion for an interlocutory injunction in a dispute related to the “Bombay Frankie” trademark therefore made headlines, at least in trademark circles, for two reasons. First, the fact that the injunction had been granted was in itself noteworthy. Second, many in the intellectual property bar were of the view that the decision misapplied certain fundamental principles of trademark law and therefore introduced uncertainty into the law.

I Can’t Wait! Speeding Up Processing of Your Canadian Trademark Applications

Canada continues to make news (the wrong kind) when it comes to the slow pace of its examination of trademark applications. Despite repeated promises by the Canadian Intellectual Property Office (“CIPO”) to speed things up, the problem is only getting worse. However, there are some promising signs.